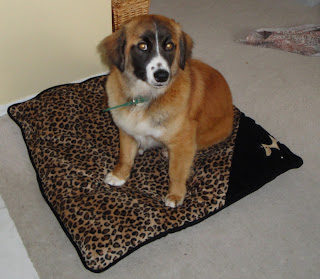 What started out as a Saturday bike ride, ended up as an adoption outing. My husband and I rode by the Animal Shelter dog adoption in front of the theater. I just wanted to stop and look. Here's what I looked at - Lucy and she's in my bed right now - scared little girl. She'd been lost, found by the animal shelter, spayed, fostered and adopted in the last three weeks.
Posted by annesermonsgillis at 4:04 PM No comments:

I began my spiritual journey when I was around four years old. In grade school, I ventured from church to church, looking for the truth. My neighbors were always glad for me to tag along, and I received a broad base education on the ins and outs of religion, hope and spiritual styles. As a teenager I read Edgar Cayce and stories on reincarnation; I hoped to reach a level of understanding and wisdom that would serve me as well as others. My mom had her finger in metaphysics, as did my grandmother and great aunt. Their open minds provided me with a thirst to explore, question and examine life.


In 1973 I started meditating. This opened up other worlds, new dimensions. In ‘76 I had my first awakening. Experiences come and go but waking up is more of a change of paradigm and a new permanent way of living. Since I then have stringently followed the inner trail to truth. I ventured to India in 1989 to be near a powerful guru. I spent years in that discipline. In 1995 I met a woman who turned my mind around. She was a Cherokee elder. I understood things about creation that I had only glimpsed in the past. I felt a lot of personal power – the infinite possibility we have as creators and my ability to create things beyond my wildest imagination.

In 1997 I met Gangaji, who moved life to another level – personal power could be helpful and certainly could change the world for good, but there was something more. That something is difficult to put into words. I again traveled to India and brought home every book I could haul back on the topic of non-dualism and vichara. Ramana Maharshi’s grace filled me. I went beyond that which can be taught. I stumbled across John Sherman’s work. I was looking for someone who was familiar with vichara. I found that John had been changed by Ramana and Gangaji. I read his words and felt as if I’d met a kindred soul. Life can only be only experienced, not learned, controlled or rehearsed.

So naturally, I’ve wanted share that which cannot be taught, with others. Fools rushes in - you know the drill. I’ve hesitated many times because the place I point to is easily overlooked and too often marginalized in the westerners need to learn, grow, pigeonhole, compare and produce, but regardless, I decided to share the message in the best way I can. The books I have from India are not available in the USA, but I did remember a book that touched the truth. The book is confrontational, iconoclastic, challenging and hilarious. It is Anthony Demello’s Awareness: The Perils and Opportunities of Reality. That’s why I signed up for the Wednesday night spot – wanting to share the wisdom lurking in the corners of our souls with souls who are open to the perils and opportunities of reality.

No book is perfect and sometimes I think DeMello’s message narrows and loops us back to the old paradigm, but just when I think that, he seems to unlock the mind in new and exciting ways.

I hope to see you in class. Know that I love you and that the I that loves you is bigger than time, form, emotions and bodies. The I that loves you is not the body of Anne Sermons Gillis, even though that body and all bodies live in that. I am that. You are that and that’s all folks! 5:15 Creative Life Center, Spring, Texas. Call me for information. 281-419-1775.
Posted by annesermonsgillis at 3:57 PM No comments: