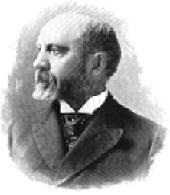 I'm doing a talk on the epigenesis of Unity and I ran across this information on one of the not so well known founders of the New Thought Movement. It has links to a number of free New Thought ebooks by Henry Wood *

"Those who are doing the most to uplift the world are those whose intensity of faith first reconstructed their own souls."  Ideal Suggestion, page 128

Henry Wood (1834-1909) can be described as one of the pioneers of the New Thought movement, even though he was neither a minister nor the founder of a church or center. A successful businessman and author, Wood was forced by ill health to retire. He somehow came across the principles later known as New Thought, was healed, and sought to help others to learn to heal themselves. He was one of the founders of the Metaphysical Club and at one time served as its president.
Wood, along with Horatio W. Dresser, was one of the two New Thought authors specifically singled out for praise by William James in his Varieties of Religious Experience. Here is what James had to say about New Thought, known at the time as "mind cure":

The plain fact remains that the spread of the movement has been due to practical fruits, and the extremely practical turn of character of the American people has never been better shown than by the fact that this, their only decidedly original contribution to the systematic philosophy of life, should be so intimately knit up with concrete therapeutics. (p. 94)
On the same page, James, after describing "a good deal of the mind-cure literature" as "so moonstruck with optimism and so vaguely expressed that an academically trained intellect finds it almost impossible to read it at all", states in a footnote that he considers Horatio W . Dresser and Henry Wood "far and away the ablest of the group" of mind-cure authors.
Wood was the author of twelve books that were highly successful, selling in the tens of thousands and going through numerous reprintings. A few of them are still in print and for sale online. All of them are available as Google pdf files. They can be reached by clicking on the titles listed here.
1887 Natural Law in the Business World
1890 Edward Burton
1892 God’s Image in Man
1893 Ideal Suggestion Through Mental Photography
1894 The Political Economy of Natural Law
1896 Studies in the Thought World
1898 Victor Serenus
1901 The Symphony of Life
1901 The Political Economy of Humanism (rev. ed. of 1894 book)
1903 The New Thought Simplified
1905 Life More Abundant
1908 The New Old Healing

For whatever reason, the Google pdf file of Henry Wood’s Ideal Suggestion Through Mental Photography (1893) is missing pages 107-110. Page 107 simply reads, "PRACTICAL DIRECTIONS FOR IDEAL SUGGESTION". Here is the text of the other three missing pages:

PRACTICAL DIRECTIONS FOR IDEAL SUGGESTION.
______
Instructions for the use of the Suggested Ideals contained in the following pages.
FIRST. — Retire each day to a quiet apartment, and be alone IN THE SILENCE.
SECOND. — Assume the most restful position possible, in an easy-chair, or otherwise; brethe deeply and rather rapidly for a few moments, and thoroughly relax the physical body, for by suggestive correspondence this renders it easier for the mind to be passive and receptive.
THIRD. — Bar the door of thought against the external world, and also shut out all physical sensation and imperfection.
FOURTH. — Rivet the mind upon the "meditation" (left-hand page), and by careful and repeated reading absorb its truth. Then place the "suggestion" (right-hand page), at a suitable distance from the eyes, and fasten them upon it for from ten to twenty minutes. Do not merely look upon it, but wholly GIVE YOURSELF UP TO IT, until it fills and overflows the entire consciousness.
FIFTH. — Close the eyes for twenty to thirty minutes more; behold it with the mind’s eye, and let it permeate the whole organism.
SIXTH. — Call it into the field of mental vision during every wakeful hour of the night.
FINALLY. — If disordered conditions are chronic and tenacious, there need be no discouragement if progress is not rapid, nor if "ups and downs" occur. Absorb the ideals REPEATEDLY, until no longer needed. The cure is NOT magical, but a NATURAL GROWTH.
Ideals will be actualized in due season.

FIRST MEDITATION
Man through a careless or mistaken consciousness separates himself from God, and this produces infelicity and dis-ease. Thought confers subjective realism either upon ideal entities or upon seeming bad conditions. What we dwell upon we become, or at least grow like. Thought must have an outlet, otherwise it stagnates. God is the great normal Reality for it to rest upon. Consciousness must be open to the divine harmony, else it becomes disorderly and abnormal. It takes on character from that to which it links itself, — God, if it be God; change and discord, if materiality. It is therefore easy to be outwardly and morally correct and yet be un-Godly. The highest human consciousness is that of God, and this is "Godliness which is great gain." To change from a controlling self-consciousness to a ruling God-consciousness, is to find harmony and health. The vision must be clarified so as to behold God everywhere, within and without, as all Life, all Love, and All in All. Discord cannot long abide the divine companionship. Take the NAME, and through the medium of the outer eye engrave it on the tablet of the inner consciousness.


GOD
IS
HERE
* Source page New Every Moment This is an interesting site as well.
Posted by annesermonsgillis at 2:39 PM 1 comment: 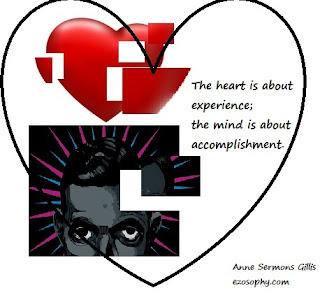 Posted by annesermonsgillis at 1:48 PM No comments: 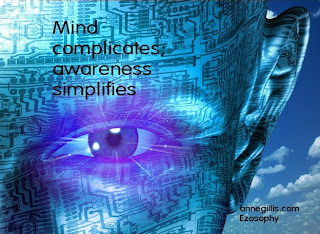 Posted by annesermonsgillis at 6:41 AM No comments:


Posted by annesermonsgillis at 10:27 AM No comments: